Why Book With Us?

Book Your Stay
Why Book With Us?

Best Price Guarantee Book direct for best available rate
Book Your Stay
Check in
10
12
2022
Why Book With Us?

Why Book With Us?

Book Your Stay
Why Book With Us?

In advance of Friday's release of a new film on the comedy duo, John Daly looks back to the day in 1953 when they disembarked from a liner in Cobh and engaged in a mutual charm-fest with locals.

For the citizens of Cobh, September 9, 1953, will always be special. In a town historically associated with the trauma of forced emigration and the ill-fated Titanic, it was a day when Hollywood in all its glittering glory - namely Laurel and Hardy - put a smile on the face of Ireland. 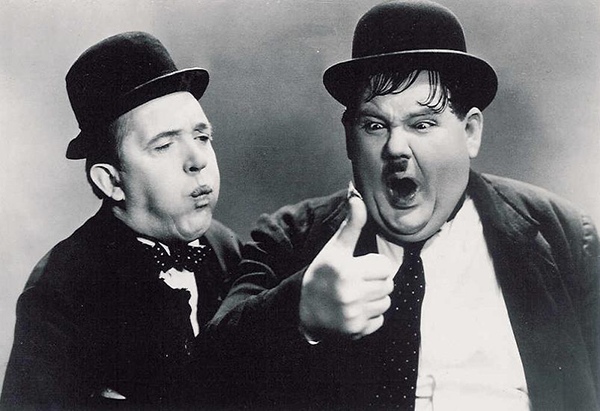 Enshrined as one of the greatest comedy partnerships in film history, Stan Laurel and Oliver Hardy made 107 film appearances between 1927 and 1950, achieving a successful transition from ‘silent to talkies’ that few other stars of that era had accomplished.

As the SS America liner dropped anchor that Autumn morning, the visit to Cobh marked the start of a final gamble for the pair’s fading popularity with a tour of Ireland and the UK designed to lift their fortunes one last time.

But while their departure from New York excited little media comment or attention, their arrival in the famous Cork port saw the pair instead feted as all-conquering comedic heroes whose star remained at its brightest this side of the Atlantic.

In a year where thousands of unemployed marched on Leinster House demanding jobs, the pair whose slapstick antics charmed generations of moviegoers brought a badly needed glimpse of international glamour to a deeply conservative Ireland still struggling with the aftermath of ‘the Emergency’ and an all-pervasive economic depression.

Adrian Patrick Gebruers, who celebrated his fortieth year as Carillonneur of St Colman’s Cathedral in 2010, recalled the day as a 10-year old student at St Joseph’s Primary School.

“The thought that our favourite film comedians might be a stone’s throw away down town while we scholars sat in our classrooms was more than any human beings could be asked to endure. We therefore took advantage of the morning yard break to petition the school principal to allow us out to see the film stars.”

Unable to resist the collective pleas of hundreds of over-excited boys, the ageing Brother Eugenius waved his hands in surrender and granted a morning off school.

As he hurried down the town’s ancient streets to join the thousands of spectators swarming the quays for a perfect vantage point to witness his Hollywood heroes, little did the young Adrian realise the key role his family would play in the unfolding spectacle of abundant hero-worship about to transpire.

Fast-forward to the deck of the SS America and the recollections of Stan Laurel as he gazed in awe at the enormous Irish welcome that was assembling on shore for the pair, “The docks were swarming with many thousands of people. It’s a strange, strange thing our popularity had lasted so long. You’d think people would forget, but they don’t. The love and affection we found that day at Cobh was simply unbelievable.”

Amazed at the sight of hundreds of boats blowing whistles and fog horns, added to by the scores of people screaming on the docks, the pair of comedic legends “just couldn’t understand what it was all about.”

At just that point, Adrian Gruber’s father Staf, the then carillonneur at the cathedral, began to play’s the Laurel and Hardy theme tune — the Cuckoo Song — booming out from the massive bells across the town and over the water.

“As the cathedral bells started to ring out our theme song, Babe [Hardy’s nickname] looked at me, and we cried,” Laurel was later quoted as saying. “Maybe people loved us and our pictures because we put so much love in them, I don’t know. I’ll never forget that day. Never.”

Struggling through the massed crowds that awaited their every move from Cobh pier, Laurel and Hardy insisted on being taken direct to the cathedral to “thank the bell-ringers” for the momentous welcome.

It was an occasion where the 10-year-old Adrian got to see his heroes close up.

“When Ollie went to take my father’s hand to thank him, the accumulated emotion of that whole morning seemed to suddenly spill over the poor man and words failed him. Tears began to roll down his cheeks as he engulfed Dad in his not inconsiderable embrace.”

The warmth of the Irish welcome clearly touched the pair deeply— especially at a time when their star power had all but disappeared in Hollywood.

“There was no denying the sincerity of the film stars’ gratitude.

Having their theme played on the carillon and the great warmth of the welcome they’d witnessed in Cobh was a genuine public acknowledgement of the innocent fun they had given to millions which seemed to deeply touch them.

WHEN director Jon Baird and screenwriter Jeff Pope came together on the project that would eventually complete as Stan & Ollie, they were aware of the delicacy required in telling a tale of such a well loved pair.

Laurel and Hardy have inspired three museums, an appreciation society entitled Sons Of The Desert and a devoted international fan base of over 100 chapters. Not only confined to the English-speaking world, their popularity orbit was truly global — known in Germany as ‘Dick und Doof’, in Poland as ‘Flip I Flap’ and in Brazil as ‘O Gordo e O Magro’.

Fondly embraced for their madcap world of sublime silliness enshrined in television reruns, cartoon adaptations and a Twitter Gif, it takes only the first few bars of the ‘Cuckoo Song’ to prompt immediate recognition of their antics 80 years later.

Taking that final tour of Ireland and the UK to revive their flagging careers offered an opportunity to showcase on film their unique relationship unknown to the world.

“You just have this wonderful picture of these two guys that had been such giants staying at little guest houses, playing tiny theatres and not realizing they did it because they loved each other,” said screenwriter Jeff Pope. “This is the thing that inspired me to write the whole film. I think it’s a love story between two men.”

Even the title of the film hints at the dedication to exploring the men behind the legends, and the revealing truths behind their cinematic personas. “They lived through wives, work, bankruptcy, highs and lows. They are reaching a point where they are realising they are old and might be towards the end of their lives. Watching that reflection is fascinating even if they weren’t Laurel and Hardy.”

Whereas Hardy was the boisterous character always taking control in their on-screen adventures, Laurel was the creative brains who oversaw every aspect of production from concept to completion.

Hardy left all the intricate details to his partner, only coming to the studio for filming, then promptly heading off to play golf with Bing Crosby and WC Fields.

Hardy explained the core appeal of the pair: “Those two fellows we played were nice, very nice people. They never got anywhere because they were so very dumb, only they didn’t know they were dumb.”

While their partnership was based on mutual respect and friendship built over decades, off-screen they preferred to keep work and personal lives distinctly separate.

“They were never really close until they took these arduous tours and lived in each other’s pockets week in, week out. The premise of the film is how they became as close in their real lives as they were in their fictional lives.”

While much of the comedy in Stan & Ollie comes from recreations of the pair’s stage acts, the script also sews in some of their most famous routines into the fabric of their lives. “As with many comics, there is not a total distinction between a comedy character an actor plays and who they are in reality,” observes Steve Coogan, who plays Stan.

“There is an overlap and we try to let the audience see that. Rather than try to tell the chronological story, the film shines a light on a specific aspect of their lives and you can learn everything from that. You can see humanity in a moment.”

The actors not only re-created the skits Laurel and Hardy performed on stage, but also invented extra slapstick choreography for the film.

“Because of the theatrical nature of the tour we were filming performances with people out in front of us,” says John C Reilly, who plays Ollie. “It was not only the pressure of making a film but then the pressure of all these people sitting there watching us. It almost gives you a battlefield loyalty to each other.”

Even at the final curtain, comedy still came naturally to the these masters of the art. In hospital after suffering a heart attack on February 23, 1965, Stan Laurel, aged 74, told his nurse he would rather be skiing. “I didn’t know you skied,” said the nurse. “I don‘t,” replied Laurel, “But I’d rather be doing that than having these needles stuck in me!” A few minutes later, he died.

His longtime partner, Ollie, had pre-deceased him in August 1957, aged 65.

Dick Van Dyke gave the eulogy, and recited The Clown’s Prayer: “As I stumble through this life/Help me to create more laughter than tears/Never let me become so indifferent/That I will fail to see the wonders in the eyes of a child/Or the twinkle in the eyes of the aged.”